I’m lying in bed, having warm, lazy Sunday snuggles with the furball, when I hear screeching. It’s loud and it’s close and Meep is straight out of bed and up on the window sill, curious and alert, both of us wondering what the hell is going on.

When the noise doesn’t die down immediately, I heave myself out of bed and join the littl’un at the window, trying to pinpoint the direction of the sound. After a few moments, silence falls and I see Dad coming back in from across the courtyard where he’s obviously also been trying to figure out what’s happening but has given up now that he has no sound reference. It certainly sounded like something in distress.

I’m just pondering whether it’s worth trying to recapture my snuggles and musing that it’s unlikely Meep is going to be cooperative about that, when the screeching kicks in again. This time, I throw on a nightie, thrust my arms into a hoodie, and am zipping it up as I make my way downstairs, determined to find out whether something out there needs help.

As I push through the back door, I see that Dad is standing under the archway across the courtyard, staring up into the rafters. I barely take three steps before a bird comes flying out past him, straight towards me, then diverts into the magnolia and lands on a low branch. My first thought as it was flying was that it was a large dove or small pigeon – there are plenty of those round here and several very local residents – but when I approach I can clearly see that it’s a small, slate-grey raptor, with yellow feet and beak/eye area, and a pale underside patterned with distinct barring. It allows me, then Dad, to approach surprisingly close, perhaps a metre, metre and a half away, before deciding it’s had enough and making for the taller trees further off.

Dad thinks there may have been two of them, starting out on the roof of the dépendance, possibly mating, but he doesn’t know where the second one went. We go back in to get on with breakfast and other necessary morning stuff.

When the screeching starts up again very soon after, I look out the back door and see, under the arch, two birds with much flapping, one on top of the other. It looks as though Dad may have been right, although there’s so much movement it’s hard to say what’s actually happening. I go out, phone in hand, hoping to capture some of the action but I’m still not used to the way the video works on this new device and what I think I’ve filmed, I frustratingly absolutely have not. But what I’ve seen is two birds in a flap which progressed into the corner behind the bike and one coming out, headed for the magnolia, then further afield. Dad has joined me by this time with my actual camera and we try to get a few shots of the bird that’s in the open. I end up walking halfway round the garden and through the woodland but I get a couple of semi-decent shots. Hard to do through the spring growth of a massive willow but I find a reasonable vantage point where I won’t get my feet stung by early nettles coming up and voilà, pix. Having looked it up since, we’re pretty sure it’s a peregrine falcon – not the first we’ve seen but they don’t usually come so close to the buildings.

Meanwhile, I realise that I don’t think the second bird ever exited from its little hidey-hole behind the accumulation of things that have been living near the back of the bike, waiting to be taken to the tip. When I go back, it’s hard to make out anything much through the rusted iron and pile of old leaves that have blown in over the winter. I wonder whether I missed it coming out or whether it’s lurking behind the knackered old coffee table top that’s propped up against the wall, when I realise there’s what looks like feathers right in the corner. They don’t appear to be moving, which is slightly worrying. It’s pretty dingy in there so in an effort to see what’s going on, I take a picture which on inspection clearly shows the body of a bird. A second shot from a slightly different angle reveals a head, pushed right into the slight cavity created by some missing brickwork. I don’t like the angle it’s at. And it’s still not moving. And I’m pretty certain by now that it’s a green woodpecker, not another raptor, which means it was a victim, not a mate or even a rival.

I call Dad back to help me with the lifting and reaching of things (I did something to my back this morning, bent in the wrong direction while breathing – one of the perils of hitting my particular age range, I understand), glove up, apron on, and head back out to check out the bird.

Once the rubbish is moved aside, I can see the little feathery bundle more clearly now. I’m fairly sure I can see breathing, which is good, but it remains still, not straightening out its head. I hope it’s just shock and not anything more serious.

Dad manages to reach in and carefully scoop it out. It seems small for a greenie, so it may be a juvenile. After a brief hesitation, the first thing it does is flap to the ground. Phew, things can’t be too bad if it can do that! It just sits there, waiting, while Meep, who has joined us, tries to approach and is firmly told to back off. It seemed that only one wing flapped on the way down so we need to know if the other one is ok. I lift it from the ground against a small amount of resistance as it clings on to the grass underneath it, and it rhythmically flaps its left wing for a few seconds at a time but not the right. As I gently tease the right wing open, I’m relieved to note that, as far as I can tell, nothing seems broken. It’s possible it is strained and/or bruised but nothing is dangling or bleeding and there’s almost no reaction from the bird itself when I manipulate the limb so I hope that means it’s not too painful.

It flaps to the ground again and continues to exercise its left wing then sits there. Meep being still a little too curious for its good (although when he pounces, he lands wriggling on the other side of it, rather than on top of it so this is play, not hunt), I pick it up again and it seems a little brighter than before, lifting its head and paying more attention to its surroundings. Exercising continues and we go through the cycle a couple more times. Each time the right wing is more involved and it flies a little further. It also starts hopping along the ground the way they’re supposed to. The last time I lift it, it stares straight at me alternately with checking the skies for predators, relatively calm, seeming to understand that I’m not going to hurt it, then it flaps a couple of metres away and starts making its way through the hedge and along it towards the willow. At this point, all I can really do is watch as it seems to be recovering nicely, thank goodness. Although I do have to make another effort to scare off the raptor which reappears as the woodpecker launches itself into the undergrowth. I can only hope that what I’ve done is enough but it stands a better chance than it did and that will have to do.

I looked them up and I think the woodpecker was a female (no splash of red in the moustache). It will be interesting to see whether we continue to receive visits from the falcon.

Here are the slightly dodgy photos we managed to bag (the one of the woodpecker on the grass is Dad’s): 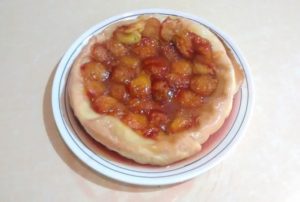 According to the original recipe, these quantities serve 6.
I’ll be honest, we had a quarter each. We probably could have just eaten it all in one sitting.

*We’ve been trying to work out exactly what this means. It seems to come somewhere between a shortcrust and a puff. Much greater structural integrity than puff but a lot lighter than your standard shortcrust. If in doubt, a decent shortcrust pastry would be totally acceptable, I’m sure. I’m including a recipe I found for the thing itself if you’re inclined to make your own.

Note on equipment:
A tarte tatin tin is not a must but is strongly recommended for this activity. It really does make a difference having the right kit.
If you can’t lay your hands on one, though, you’re looking for a decently heavy-bottomed, ideally non-stick, hob-to-oven round tin, about 5-6cm/2.5” deep and 24cm/9.5” diameter.
If you can’t access a hob-to-oven tin, you probably can transfer the fruit after the first stage but it’s going to be fiddly and messy and if you’re looking to get good presentation, this might make it harder.

Because some people are never satisfied. 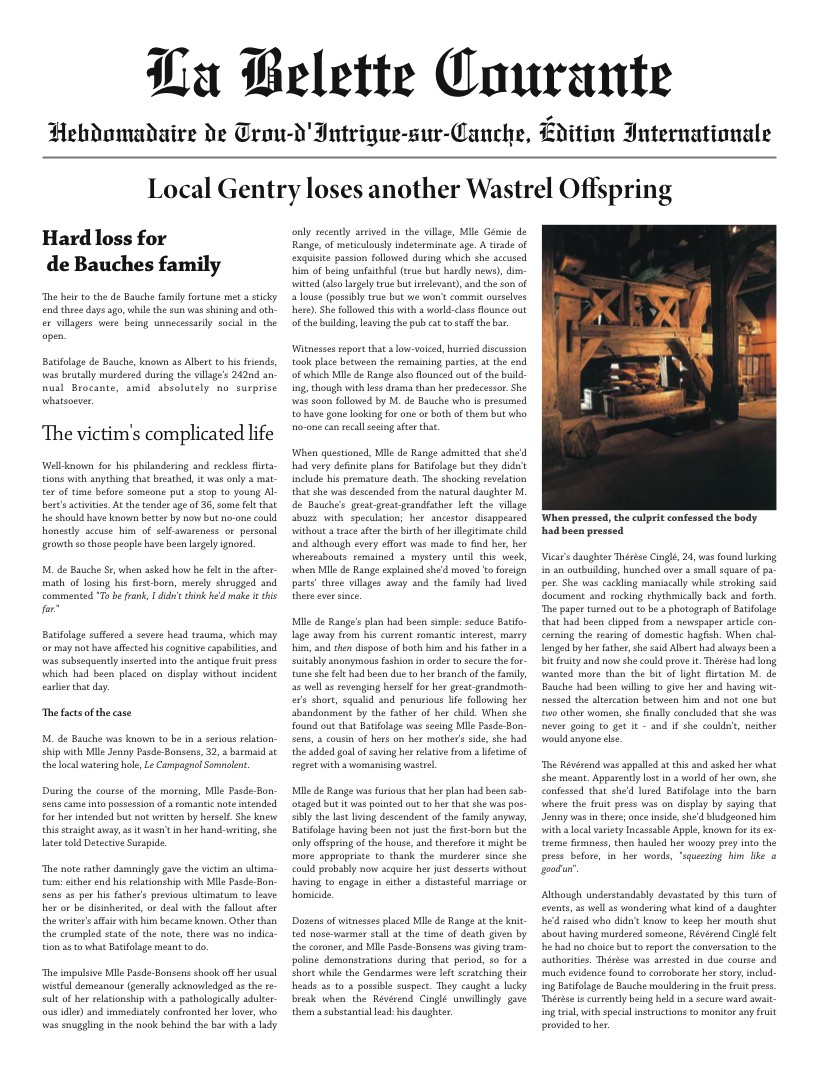 This is my début short story, Grace is Wicked.

Why is someone scratching (and sometimes oozing) writing all over Kat’s things? None of her family are owning up so what will it take to find out why Grace is Wicked?

Available in all Amazon marketplaces. 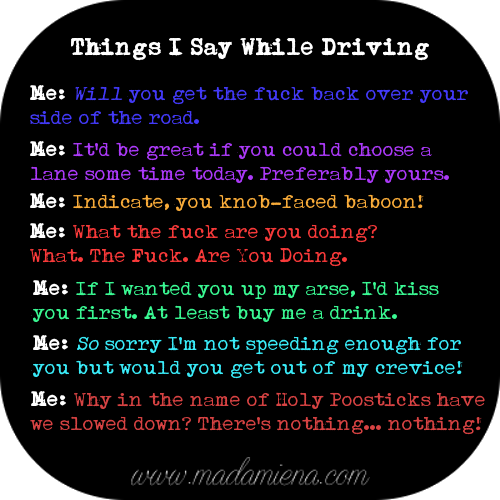 It’s easy to lose your way in a silent winter night. Two o’clock in the morning, with a fresh cushion of inviting snow wrapped around every shape that usually holds such a familiar feel but is now changed, new and a little fantastic. No light to guide you, except from a feeble and partially clouded moon, END_OF_DOCUMENT_TOKEN_TO_BE_REPLACED 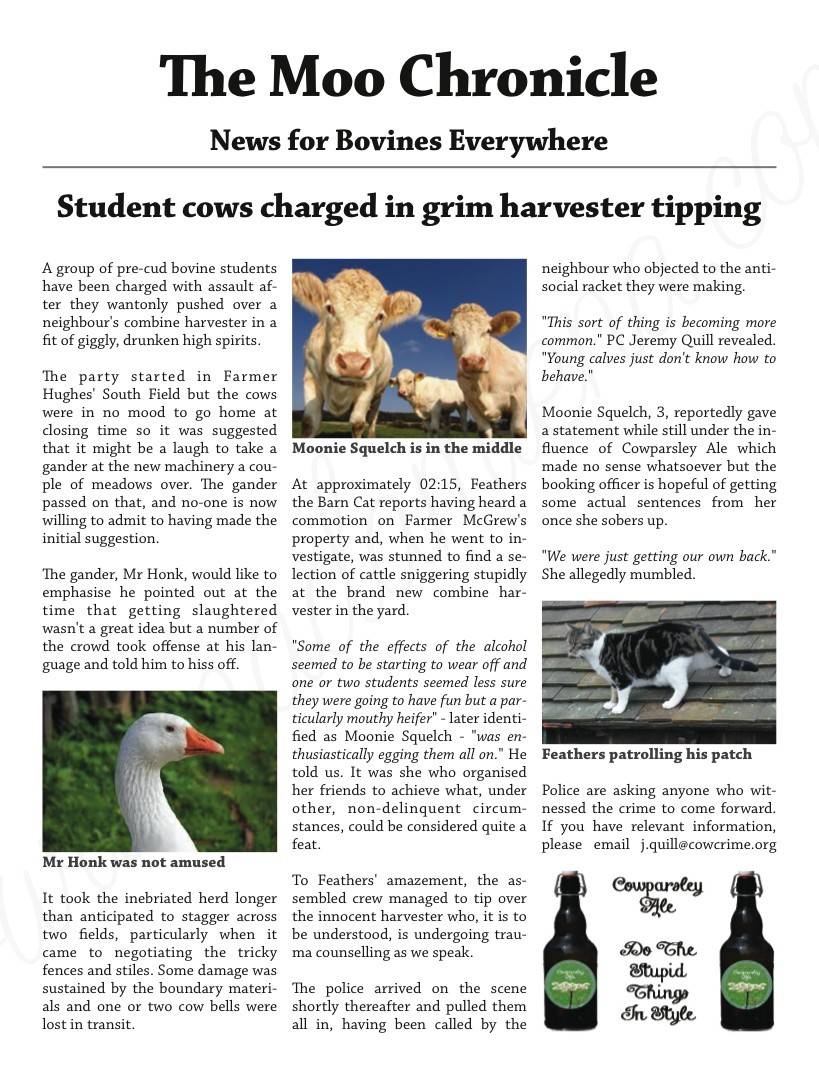 We made this the other night in a fit of ‘What the hell are we doing?’ It’s pie in the sense of ‘shepherds’ and ‘cottage’. So does that make it ‘henhouse’ pie? Who knows. Let’s get to the food.

It serves 3 hungry people for a dinner or 4 people with more moderate appetites. END_OF_DOCUMENT_TOKEN_TO_BE_REPLACED

Dad and I took a little trip up to what is rapidly becoming a favourite vantage point on the hill at the top of Monchel. There are a couple of other shots taken in and around the house but a lot of this is going to be the glorious sunset from four days ago. Because wow. So please forgive me if some of them are a little similar to each other, I had a really hard time choosing 😉 END_OF_DOCUMENT_TOKEN_TO_BE_REPLACED